$COIN is guiding $1.5 billion of stock based comp for FY22 while firing 1000 employees. That’s $1.5 million per fired employee.

Inflation expectations, according to the NY Fed, are dropping, at least at the three-year horizon. This is a generic link to the latest results, I think. Houseowners are panicking a bit as they struggle to sell their homes. 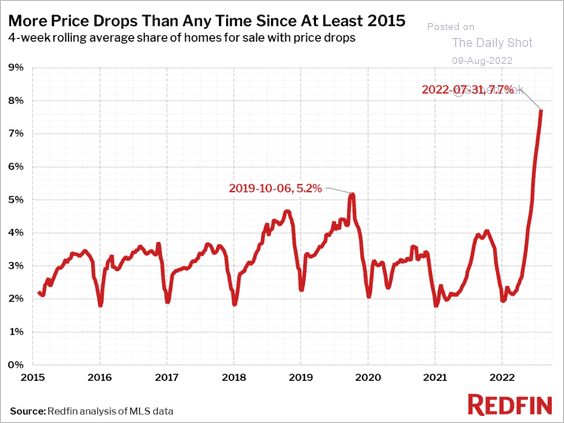 ![[EN-Crack2208090439.png]] (The 5-3-2 spread reflects 5 barrels of crude to produce 3 barrels of gasoline and 2 barrels of heating oil. I presume what is charted is the difference between the ten barrels of refined product and ten barrels of feedstock crude.)

The Old Lady in the metaverse

The Bank of England is writing undergraduate-level drivel about the metaverse, and the role of crypto in it. I am not joking.

Will the Fed pivot slowly, quickly or not at all? This post is not saying anything very new. Its basic point is that to keep hiking is to crash the economy, but that not to pivot might not be any better. This explains what might happen if the Fed pivots quickly:

It is difficult (but not impossible) to imagine a scenario where the Fed capitulates on current policy direction within (say) a year or so of today. However, monetary policy over the past 25 years or so has been about lower lows and lower highs. So, what conditions might see such a scenario?

This would likely see an apocalyptic scenario, where asset markets crash following a Fed interest rate hike, the US economy entering a deep recession, and some form of credit crisis. All of which would be reflective of an economy which is far more sensitive to higher interest rates than the Fed might currently believe, based on their narrative. And the Fed was quick to respond to asset market crises in 2009 and 2020.

This time around, however, the fed would know that falling short of arresting current inflation rates would lead to persistently higher inflation. This would most likely lead to a “stop-start” economy, where the Fed is continually raising and easing interest rates. This of course would lead to a more volatile GDP.

I think this is the most likely scenario. The Fed believes that it’s status rests on its ability to tame inflation. On the other hand, it is a creature of politics, and crashing the stockmarket would be intolerable to whichever US government is in power. It’s a difficult call, certainly more difficult than in 2018.

Everyone thinks that China is the enemy, but nobody thinks it’s a good idea to provoke it. With the exception of Nancy Pelosi, who visited Taiwan yesterday (actually it was the third, nearly a week ago). The USA leadership cannot afford to be positive about China and still get elected. The Chinese leadership cannot disclaim their position on Taiwan. It’s hard to see anything good coming out of this. As China slides into recession, the natural response of Xi will be to amp up the rhetoric against the USA, the classic fascistic strategy. Although I doubt if Xi wants a shooting war, sometimes these things happen by accident.

The fact that Xi is dictator for life increases the chance of a kinetic war enormously, in my view. Maybe not now, be eventually Xi will decide that in order to keep the people behind him, he will have to announce that China is at war, and that is the reason they have to make economic sacrifices. Given the precarious state of the construction market, which accounts for 30% of China’s GDP, this might be sooner rather than later.

Briefing says it best. Patrick J O’Hare explains that although the CPI was a nothingburger (exactly as expected), the market leapt for joy.

Mainly risk on: dollar up, stocks up, yields down, commodities up (not gold, or iron).