When the Covid recession started, people started wondering what the recovery would look like. The recovery from the Global Financial Crisis in 2008 was horribly drawn out, and in fact GDP took longer to recover than it did in the Great Depression of the 1930s. How Bernanke, Yellen & Co. can be so self-congratulatory for killing productivity growth so comprehensively has always baffled me, and probably always will. The different scenarios were given a letter, so a V-shaped recovery was one where there was a single, steep leg down, followed by an equally steep leg up. An L-shaped one was one where the recovery was almost imperceptible (like the last one). Then I started seeing references to a K-shaped recovery. There are a number of interpretations, but this 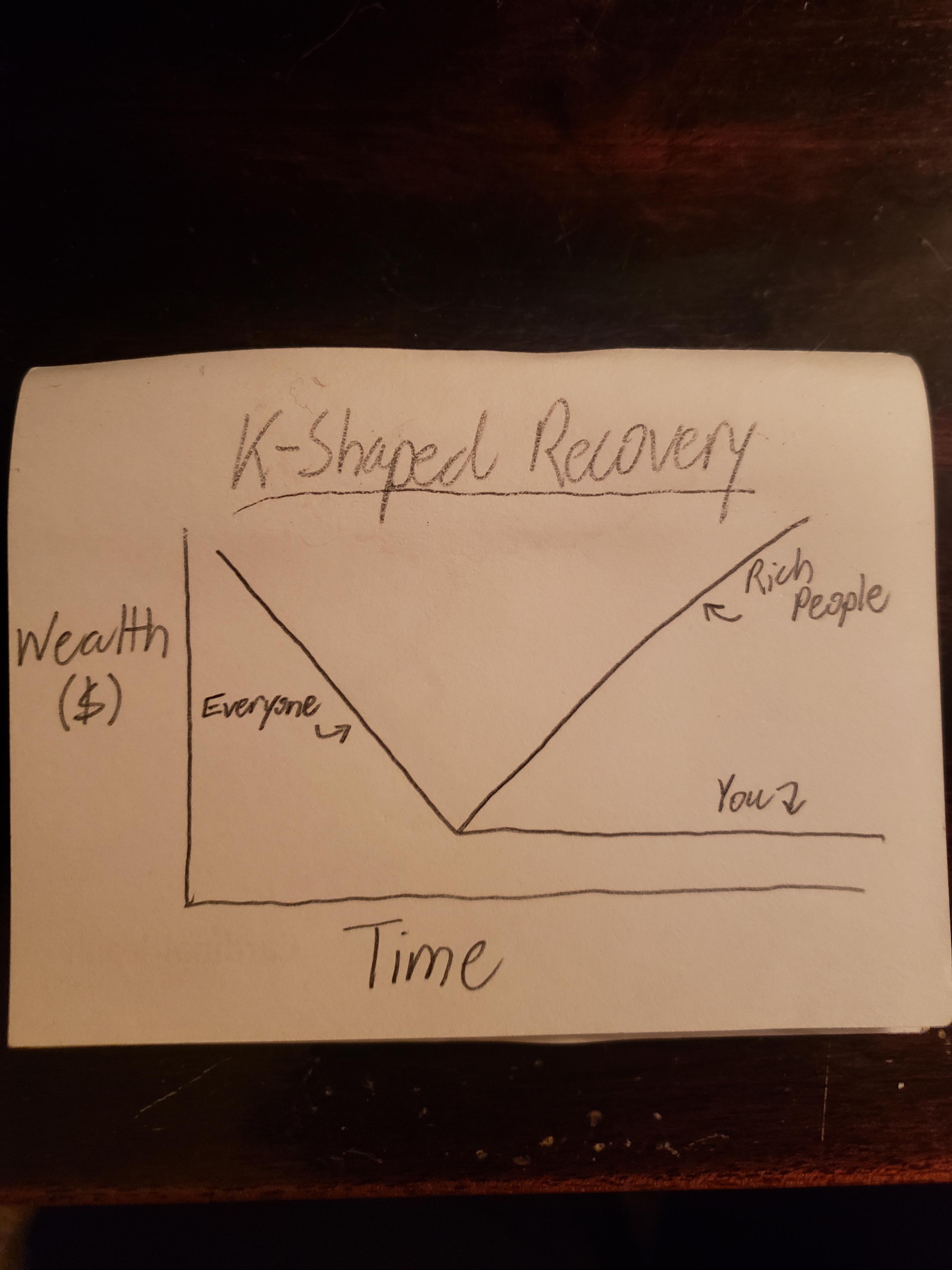 More detail can be read in this note.

Stephen Roach explains here why the dollar is doomed. Certainly, the USA is very unlike Japan in its savings behaviour and (therefore) its current account evolution.

On the other hand, if the US economy is heading for deflation, one would expect the dollar to rally. The case for this derives from the collapse in velocity of money. This is the chart for MZM, which is an improvement on M2 achieved by counting in money market funds (as far as I understand it).

The corresponding chart for vanilla M2 is as follows. It does look rather alarming. It will probably spike quite a bit, as GDP has been artifically depressed whereas the stock of money probably responds sluggishly to economic conditions: people are happy to see their current account return to credit for a while.

Coal is such a hated asset now that $BTU is yielding over 13%. This means that if the company can keep paying out at that rate for seven or eight years, even if it ends up with absolutely value as an operating entity, it will have paid back the investment.

The reality is that the USA depends on coal for 30% of its electricity at the moment, and that is likely to continue for some time.

Well, the day ended quite risk off as Trump tweets he has instructed his team to stop negotiating with Democrats over another relief package until after the election.

The polls suggest that Trump is toast. He’s confounded the pollsters before, but surely he can’t win this time (can he??).

Congress seems finally to be waking up to the threat posed by the concentration in some markets. Here is the story.

I’ve been reading Radical Markets by Weyl & Posner. They make a very good case that the biggest block on growth is the pernicious influence of large portfolio managers on competition. You can read a bit about this here but I’d recommend reading the book. It’s incredibly insightful in its diagnosis of the problems, and is worth reading for this, even if you disagree with the policy prescriptions.