Stocks are down, yields are down, the curve is flattening. Brexit is claimed to be the reason, but I have no reason to believe it. Usually, a treasury secretary or a central banker is wheeled out at this point to promise more fiscal or monetary stimulus. I have no doubt that in today’s environment, it would work. Lagarde may be the best choice now, as the ECB seems less hampered by political turmoil than the Fed is, with Biden’s nominees not yet confirmed, and Trump’s not yet out of office, but undoubtedly lame ducks.

Natural Gas (NG) is a commodity I have been watching for a long time. It’s both extracted for its own sake, and collected as a byproduct of oil. The pandemic pushed down production of oil, which I thought would be bullish for NG. In fact it wasn’t. Now oil is going up in price, NG still seems to be going down. There are lots of factors which affect the price both on the demand side (cold weather) and on the supply side (pipelines and tankers, as well as funding for fracking). Andrew Hecht, who is monotonously bullish on all commodities, has said “Trading natural gas can be like riding a psychotic horse through a burning barn.” He’s bullish again (quelle surprise!) but this time I think he might even be right. Read his piece here.

Not just wrong, but incapable of learning from past errors

The more humble (macro-)economists tend to say that their work should be seen more like history and less like physics. This doesn’t stop them making forecasts though. In a “proper” science, the failure of a theory to align with a carefully conducted experiment would result in the theory being put on the scrapheap, alongside Phlogiston, Steady State Creation, and Lamarkism. In economics, not so much, as this amazing chart reveals.

The one economist I know who has been consistently right on this is Dr Lacey Hunt. It just seems odd that nobody in the mainstream has questioned how a model can make predictions that are so consistently out of line with observation. I understand that predicting the next crash in the economy, or the stock market can be difficult, just as it is difficult to say exactly when San Francisco will experience a massive earthquake. But this is forecasting the path of interest rates, which move continuously, and (approximately) continuously and, many people believe, can be controlled by the actions of central banks. 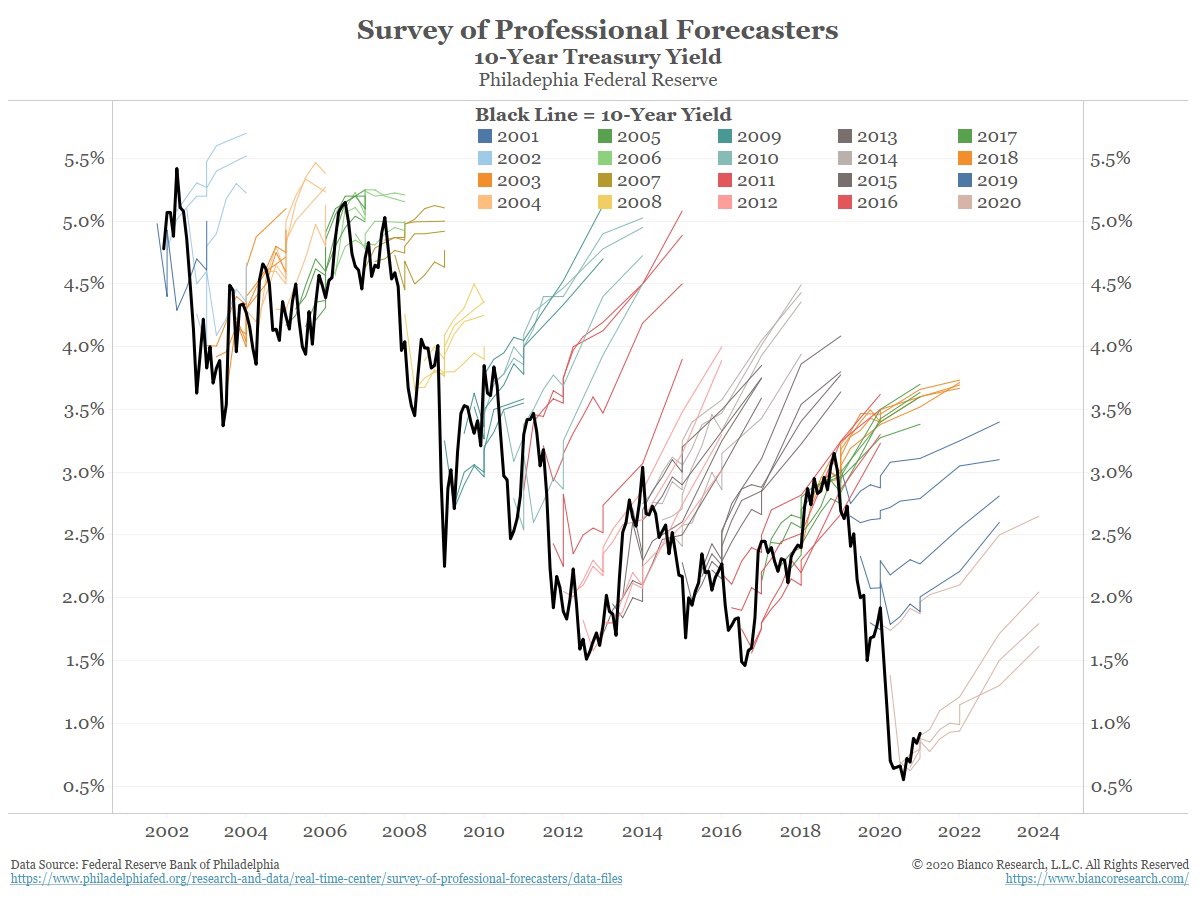 It was always going to be a trade off, between deferring to European regulation and damaging the economy. I always assumed that we had some great minds working out how, by improving our existing competitiveness, transparency, efficiency, enforcement, business environment, cost of capital, tax regime … or something , we were going to plug the hole that leaving Europe would leave in our economy. It looks as though nobody actually bothered, preferring magical thinking about the UK becoming “Singapore on Thames” (while cranking up public spending to 60% of GDP).

Well, it hasn’t worked, and we’re going to crash out, and suffer. Probably selling the pound is the logical trade, but maybe Goldman & co. spotted this a long time ago and its in the price. I hope they didn’t, and that the pound sinks, because this might just be the best medicine of all for the economy. Parity with the dollar, especially a sinking dollar, could turbocharge our exports and help us shrug off the effects of lockdown. I live in hope.